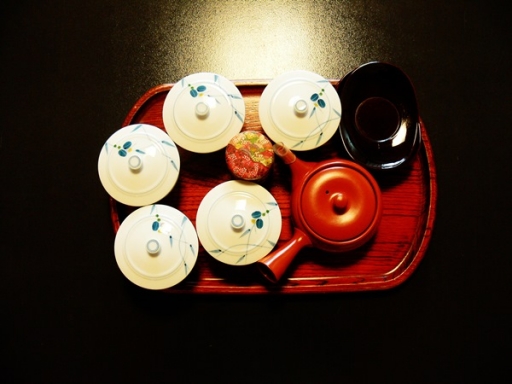 Tea Ceremonies from Around the World

Ken and I went to this year’s World Tea Expo in May, and what a fabulous time we had! There were so many highlights during that trip, but one of my favorite parts was to be able to witness several tea ceremonies performed. Each one had its own unique ritual and quality to it. The beauty expressed brought tears to my eyes and touched my heart.

The first one performed on the first day was a Chinese oolong tea ceremony. Preparing an exquisitely rare oolong, using a tea set carved from soapstone from the Wu Yi Mountains where the oolong is grown, the tea master meticulously brewed steep after steep. It was fascinating as he talked us through what he was doing and why. Each tool, each movement, each pour has a name and purpose. Even more exciting was that we were able to later visit him at his booth and share cups of that delicious oolong with him!

On the second day, a beautiful Japanese tea ceremony was performed in traditional full dress. She was obviously well versed in the preparation and serving of matcha. It was very much about being of service and honoring guests. The grace and ease of motion was like watching a slow creek run over smooth river rocks. I don’t remember a word being said if there was any; life seemed to stand still in silence.

Scheduled on the third day was the Korean tea ceremony. The stage was set with gorgeous furnishings, and as it began, out came a line of beautifully dressed women of all ages in traditional Korean attire. The tea master was the one preparing the tea armed with a slew of equipment along with assistants to help serve her guests as well as some audience members. Even a few treats were handed out to compliment the tea. Again, each motion was an expression of service, poise, and a practice in perfection.

Each ceremony had different tools to prepare the tea, different garments celebrating their culture, movements flowing in different directions, and specific etiquette in serving guests. However, more poignant for me was that they all had the love, sharing, and honoring of tea in common. That love of tea threaded them all together in my memory, reminding me once again of the elevating power of tea.