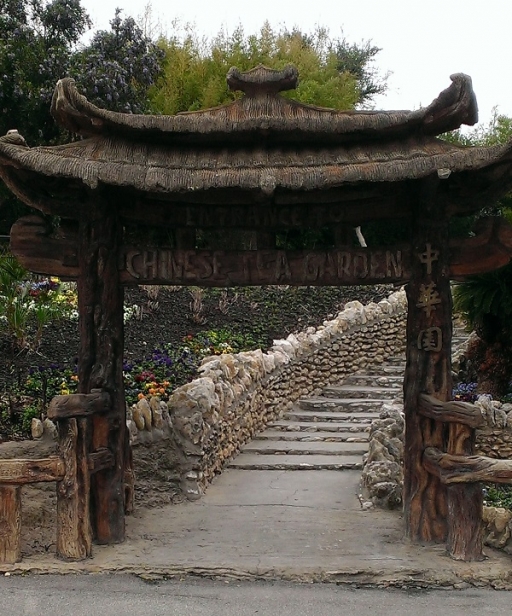 From Japanese Tea Garden, to China and Back Again

There was a placard nearby explaining some of the history of the garden, which I found rather fascinating. Located at Brackenridge Park, the garden was originally a rock quarry in the late 1800's. You could clearly imagine this as so much of the structure was made of carefully stacked stones. In 1915 the land was donated to the City for a public park where the development of the garden, lily pond, stone bridge and pagoda were completed five years later.

The City invited a local Japanese-American tea importer, Kimi Eizo Jingu to move to the garden, where he opened the Bamboo Room serving lunches and tea. The Jingu family continued to run the tea garden until 1942. Because of the political climate of World War II with strong anti-Japanese sentiment, the family was evicted. A Chinese-American family moved in to operate until the early 1960's. It then became known as the Chinese Sunken Garden, and the torii gate was constructed with the words 'Chinese Tea Garden' at the entrance.

It wasn't until 1984 that the Japanese Tea Garden was rededicated at a ceremony with the Jingu family and representatives of the Japanese government. Although the gate remains, it is now again referred to as the Japanese Tea Garden and considered one of the most cultural resources in
San Antonio. It is a beautiful spot to enjoy and take in the serenity of the stone, waterfall, koi, blooming flowers and walkways; not to mention a spot of tea to go with it!