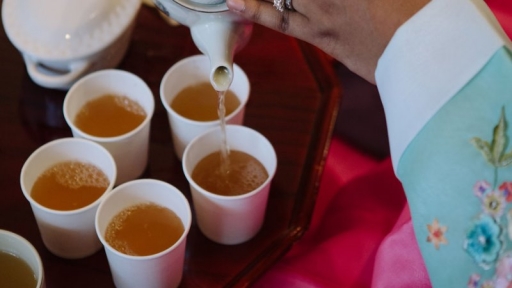 From Tea to Tears

Standing outside the roped off rectangular area, we were onlookers to a most amazing spectacle...soon to become participants. First time ever at the 10th Anniversary World Tea Expo, the Wu Wo Tea Ceremony commenced. Brewing, steeping, pouring, serving followed. I had read up on this type of ceremony and what takes place, but I was not prepared for the wave of emotion that ensued. The sheer impact of SHARING was palpable, and the wave hit me like diving into the ocean of human consciousness and peace. Tears formed and were not kept from flowing. My heart expanded in that moment to a new understanding of tea and its power in raw form.

Not just its power to heal physically, but tea's power to heal communally. A bringing together of all diversities, with no words needed, just simple sharing of one's brew with others in close proximity. Truly amazing. I couldn't peel my eyes, nor my heart, away from witnessing.

In this Wu Wo Ceremony, volunteers sat lined around the rectangle. They had brought with them their own teapot, teacups, tray and any other tea brewing accoutrement they wish to set their personal tea brewing space. There were ones serving from fine China, some using modern tea wares, and those preparing in traditional Asian ceremonial style. It really ranged the spectrum of cultures and techniques.

The first steep was shared with three other participants to their left. The second steep was shared with three spectators. This is the point where lines blured and brewers and spectators all became participants, no separation. A third steep and a forth steep was prepared to share as well. All this was done in silence. No chit chat, no elaborate explanation to impress with tea knowledge, no competition, no experience necessary. Just the love of tea, a personal relationship with their own tea ceremonial preparation, the desire to share that love with others, and the openess to receive in kind.

It was so moving to be part of this event, it still brings me to tears as I write this, reminising the pure joy and beauty of human sharing through tea. At the end of it all, we had made connections and friends, without ever speaking a word. I knew right away this was something I had to bring home to DiscoverTeas to continue the sharing, to honor the movement that was created in that moment. Watch our calendar for an upcoming Wu Wo Ceremony!